By popular demand my kid reviewers are back! G&K attended the press night of Shrek The Musical at the Grand Opera House last night and in their own words this is would they thought of the Dreamworks fairytale……

We loved Shrek at the opera house tonight! It’s not exactly like the movie which is a good thing. Instead it’s about Shrek going on a trip with his donkey friend to rescue Princess Fiona from a dragon. If he doesn’t bring her back for Lord Farquaad to marry, he will lose his swamp home.

Our favourite characters were Lord Farquaad and Donkey. Their costumes were so clever – Lord Farquaad’s was made so that the actor was on his knees and had pretend little legs sticking out. It was so funny when he sat on top of the wall and swung his legs around! 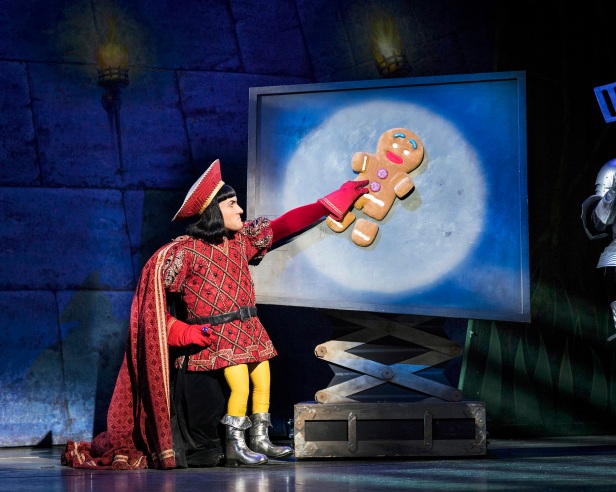 Donkey had hooves and a furry body and tail – it was a man but he really looked like a donkey! He was always making jokes and our favourite song he sang was the one with the 3 Blind Mice.

The stage kept changing and there was so many puppets and moving things. Our favourite bit was when Shrek & Donkey were walking and the back of the stage moved with them and puppets kept appearing like Puss in Boots & the Cow that jumped over the Moon. And the best puppet is the Gingerbread Man – the Sugar Plum Fairy made him talk but hid her face behind him when she spoke. 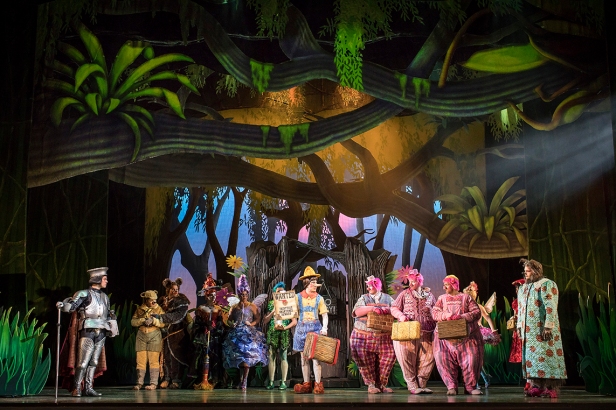 We know everyone enjoyed it as they all stood up at the end!

We would definitely recommend it to mums & dads and children over the age of 5 or 6. There were some little kids near us that got too tired near the end. Oh and there are green slushies for sale at the break – hopefully your mum will buy you one. Ours wouldn’t & that was the only bad thing all evening.