The play is set at the start of the 20th century and England is poised to go to war, but the general public is obsessed with whether a 13-year-old boy stole a 5 shilling postal order. The production opens to an opulent Victorian living room, think a beautiful dolls house perfectly lit and ready for its players. The set and Victorian costumes have the wow factor in this production. 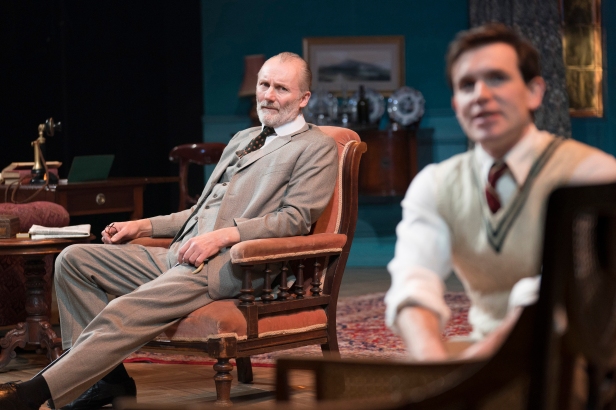 Enter said players we are first introduced to Catherine Winslow played by Dorothea Myer-Bennett and her father Arthur played by Aden Gillett.  Both perform roles of passion, they are forced to defend their family member and make sure that the little man (and women in the case of suffragette Catherine) has a voice.

The much-loved Tessa Peake-Jones, also stars playing Grace Winslow (mother of The Winslow Boy). Tessa has achieved a long standing acting career in some of the UK’s biggest television shows and is best known as ‘Raquel’ in Only Fools and Horses. She is almost unrecognisable in this role with her period dress and manner. She frets should they be spending so much money on the case is this making her family happy?

Misha Butler is currently making a splash on the small screen in E4 production Kiss Me First a programme highlighting the dangers and escapism of living in a Virtual Reality world. However Misha has left his VR googles behind in his latest role as he makes his professional stage debut as Ronnie Winslow in The Winslow Boy. He plays the meek, down trodden son.

But I feel the star of the show is Timothy Watson who plays Sir Robert Morton, he brings the character to life with authority. He is inquisitive and makes the audience stop and think did this child actually carry out the crime or is this one big fib.

Inspired by a true story, The Winslow Boy arrives in the Grand Opera House this May. I recommend it if you are interested in period drama, history and the rights of the individual.