Three generations come together for an adventure back to the 60s with the soundtrack courtesy of Dusty Springfield. It should have been an audience journey of nostalgia and great music but unfortunately this production didn’t quite hit the mark for me the storyline just didn’t make sense.

It started well we met our four main characters all talented singers and performers. Some well-known faces among the cast; X-factor star Diana Vickers, Bad Girls and Coronation Street star Debra Stephenson and Eastenders star Ian Reddington. All joined by Michael Howe who has a wealthy of theatre credits under his belt. They set out on the journey as Kat,Alison and Simon who are are all seeking unrequited love , Perfect. They feel sure that somehow this journey back into Soho of the 60s will help, unsure about this but I’ll go with it.

We meet the son of the preacher man a former shadow of his fathers legacy (Reddington) and the quirky cappuccino girls played by Michelle Long,Kate Hardisty and Cassiopeia Berkeley-Agyepong. I loved their costumes and dance moves they narrate/guide the plot and sing a lot of the Springfield songs well but unfortunately this seems to happen hidden in the background below the dialogue and action.

Here in lies my first problem we came to see a Dusty Springfield musical we want to hear her big hits being belted through the auditorium, I want to sing and clap along but instead my favourites The Look of Love, You don’t have to say you love me, I only want to be with you etc. are given no reverence and they don’t match what’s happening on stage.

The story starts to take a downward spiral when we find out about the three lovers.

Simon (Howe) is looking to find a partner whom he has had a connection with many years ago, the dance piece of the two male lovers insync with Howe was actually quite beautiful. The story lost it’s significance when the audience begin to be treated like idiots! Yes we have figured out it’s a gay relationship no need to tell us and yes we do realise the 60s was a different time. Oh and it just so happens his wife has passed away and she meant nothing to him, Ok then?!

Kat (Vickers) is pining after a hunk she found on match.com but he didn’t like her. I have to admit if I found Mike the knight perfect (played by Liam Vincent-Kilbride) online I’d probably swipe right too. He is a fireball of energy on stage, dancing and working out, don’t think I’ve seen so many press ups done by an actor on stage in quite a while, he also has a great voice and accent (when we finally hear him) which would make any woman weak at the knees. 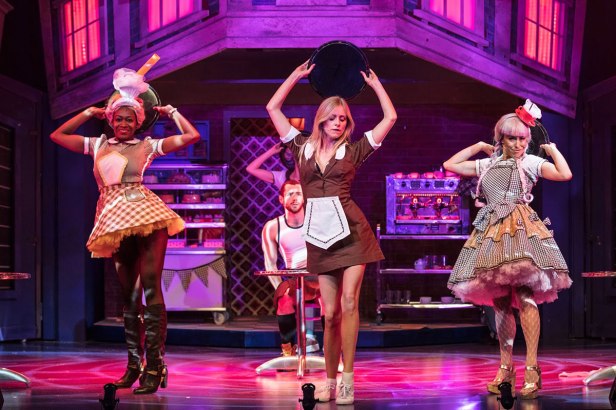 BUT here’s my problem with this storyline; Kat is trying to trap the perfect guy she goes a little OTT and wears a skimpy waitress outfit while basically trying to give Mike a lap dance. It made me cringe A LOT!!! I’ve seen flirtation in theatre done well, check out Legally Blondes bend and snap or even Rocky Horrors blatant physical theatre but this scene just made me uncomfortable. Washing over this, the character of Mike starts off as a nice guy,fighting from women’s rights and PC terms then all of sudden he’s in a kilt and is a money grabbing player? Eh Hello what happened??

Alison’s (Stephenson) relationship problems are dare I say it, a walking cliché, she is a widow who has recently fallen for her young student but nothing’s happened (she states!). Her school boy is also crushing on her and stalking her. She teaches him English Literature so why not add in a bit of Romeo and Juliet as well. The ending of their love story had me baffled she is pained with her decision throughout the production very very quickly herself and Liam (played by Lewis Kidd) just give up and decide to change partners, what, why?! Is it just to give the audience a happy ever after?!
Ok, so now that I have the faults with the story out of the way. I have to admit there is also A LOT of choreography in this production not surprising as Craig Revel Horwood was on direction. The cast are hard working and raise to this challenge in every scene. The songs when we get to hear them are good, I especially praise Diana Vickers for the closing track Son of a Preacher Man (loved it). The staging is pretty but the transitions a little slow. However I applaud the live on stage musicians that is no easy task.

Overall I think this productions storyline left me gobsmacked and unfortunately turned the production sour for me but I could see how much work and talent the cast have. I wish them luck for the rest of the run. If you go and see Son of a Preacher Man I would love to know your thoughts, from the audience reaction on the night I attended it seems to be a marmite production your either gonna love it or hate it. Let me know where you stand.

Son of a Preacher Man runs until Saturday 25th November at the Grand Opera House Belfast tickets available at http://www.goh.co.uk.