Adrian Mole has opened his diary once again at The MAC  Belfast, as Bruiser Theatre Company celebrate their 20th Anniversary. Sue Townsend’s adaptation with the company is a remount, as the company first performed this tale in 2005 . But Adrian Mole 2017 is fresh and bouncing off the stage full of vitality. Being an eighties child (I was born in 84) I was familiar with some of the book but have to admit I’ve never read the full text but I’m very intrigued to do so now.

The production begins with a fabulous ensemble piece, a song full of 80s flashbacks it’s quick in pace and full of iconic references from the Iron Lady to Meg and Mog. It comes in converbelt form almost like the generation game but minus the cuddly toy. The cast sing with such energy I struggle to see how they are still breathing. The song sets the mood of the tale which is to unfold before us, this is a young family in the 80s on the brink, there are strikes and cuts. Times are hard but people are still plodding on. Women want more than a part-time job and making their husbands tea. The storybook set opens and we are introduced to the main character Adrian who has taken refuge from a New Year’s Eve party in the safety of his bedroom. 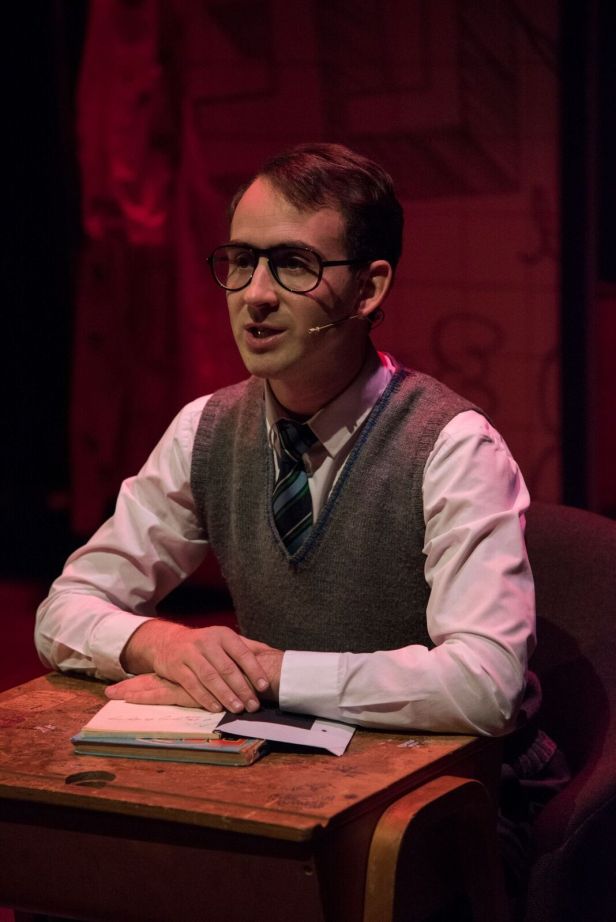 Adrian Mole is a teenager with big plans he is going to be an intellect. He doesn’t understand the fuss and commotion in life, he’s not a fan of school discos or punk but he is a big fan of Pandora. Adrian played by Adam Dougal is an annoying know-it-all, at the start of the production I felt little to no endearment for the character but as the production progressed I found he carved his way into my heart. Adam’s performance of the awkward teenager overcoming life’s challenges, spots and all captures a bit of everyone’s youth, that first school disco, that first kiss, the anticipation and want to be a grown up. He transforms on stage from a grown man to the teenager with ease and gives a heartfelt performance.

Speaking of heart, love is a central theme to this production, from the innocent first love of Adrian and Pandora (hearts and all) to the illicit affair with the sex god next door neighbour, which included quite a few flashes of Orla Mullans ample bosom. The five cast members (Adam Dougal,Gerard McCabe,Orla Mullan,Keith Lynch and Collette Lennon) are pitch perfect throughout and full of energy. They play a number of roles to perfection but I was particularly entertained by there backing dancer performances. 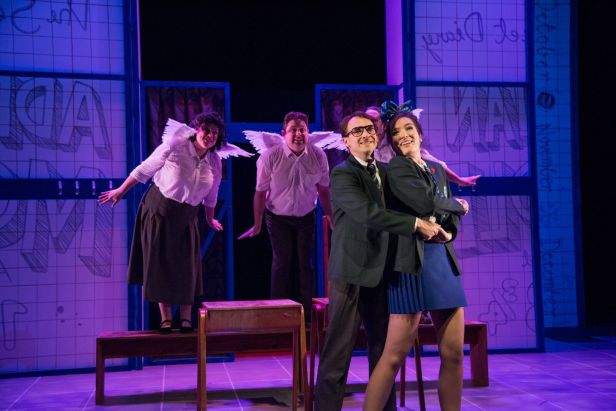 The background of some of the musical numbers contained some hilarious go go dancers, cupids and neighbours twitching at the net curtains to name a few. This is where Bruiser excels in there own form of physical humour no script needed just knowing looks and groovy moves.

Overall the cast are entertaining, enlightening and engaging. The audience lapped up the innuendos and even the substandard poetry and if you don’t fall in a little bit in love with Adrian Mole then you have a heart of stone .

Ps Congratulations to Adam and Collette (Adrian and Pandora) who get married shortly after finishing the production.

Then it will be touring across Ireland from the 10th-15th October visiting Ballina,Mullingar,Lisburn,Dublin,Armagh and Derry.