A classic tale of love, tragedy injustice and poverty retold with some very clever casting, staging and modern twists. Jane Eyre a re-imagining of Charlotte Brontë’s masterpiece  a collaboration between the National Theatre and Bristol Old Vic is breathtaking and inspiring. It capture my mind,body and soul. I weeped, I rejoiced I was on the edge of my seat and I want to see more.

With an almost pounding heart beat  from the start to the end of this production, the modern soundscape (including songs such as Mad About the Boy and Crazy) mixed with a modern multi-leveled  playground set meant that the reverberations of sound coming from the stage  almost become another character in the performance.

It was visually stunning with great tableau’s and movement pieces embodying every part of Jane’s story. Nadia Clifford maybe smalls in statute but she delivers a performance full of passion and fire. She shows Jane to be inspiring bold and a freedom fighter. 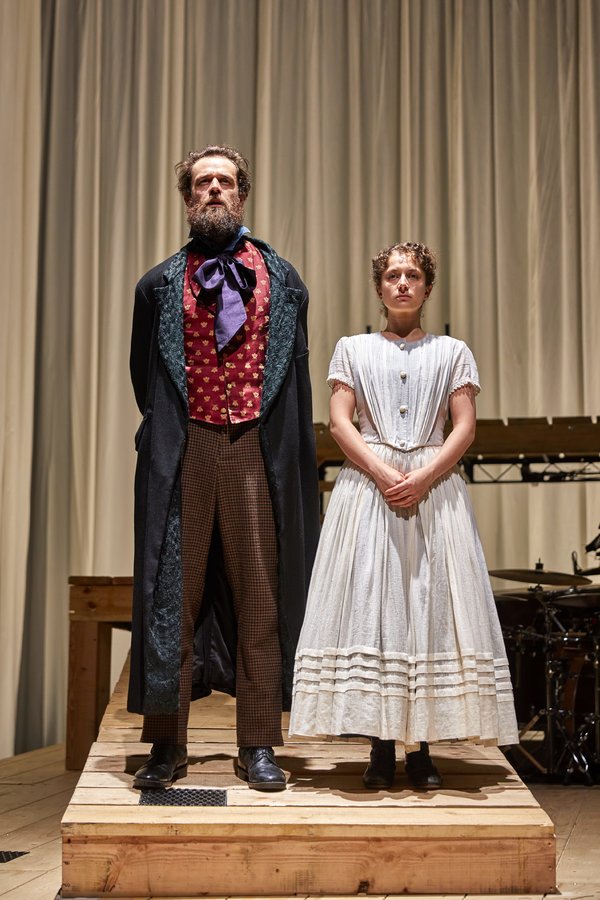 Tim Delap whom I interviewed earlier in the month  played the perfect handsome rugged but mysterious Rochester. Troubled from the moment you meet him ,I wanted to cry out in frustration at various points of the production just wanting him to breakdown the barrier between Rochester and Jane. Delap for my brought character from the book to the stage with a new level of sincerity, showing Rochesters flaws and his hope.

Local actor Paul Mundell brought much needed comic relief with his portrayal of Pilot the dog (which almost stole the show with the Belfast audience ) and I couldn’t help but think of a few MLAs in his other role as a fir branded preacher.

Overall this a tight cast, backed by fabulous musicians, the company have put a breathe of fresh air into a classic tale and I adored it.

Got tickets now at http://www.goh.co.uk