Marie Jones is a staple of Northern Irish theatre she delivers satire with a punch and usually a belly laugh. So when I saw Sinners advertised using images of  characters played by Alan McKee and Christina Nelson two superb comedy and character actors I was happy to take a seat in the Lyric Theatre. 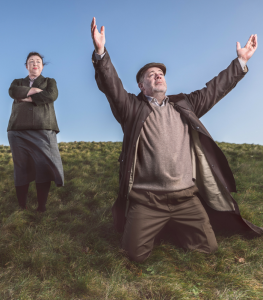 Sinners is a satire on religion and family. It tells the tale of Pastor O Hare who has come to save our souls for a small donation. Michael Condron takes on the role of the pastor. Suited and booted he delivers rousing monologues backed by some fabulous projected visuals and an amazing soundscape which sounds like something from an award winning well established gospel choir.

Performed on a stripped-back set by the talented Alyson Cummins the story moves from country family home to that of the tented tabernacle by the use of illuminated curtain. One of the biggest laughs of the night came from said curtain and the role of a member of stage management who tries to blend into the background but with comedic effect.

I will be honest the story disappointed me I didn’t get an big laughs as it poked fun and ridiculed elements of this evangelistic lifestyle. For me it didn’t go far enough, it made some interesting points and there where some fabulous lines mixed into the dialogue but it feel flat of stating anything or making us laugh. At one point Mckee grabs a cross and utters an almost  blasphemic line which should have made the audience gasp but it was lost in the mixture of characters and themes.

Don’t get me wrong performances by Condron and the cast are good.In the honey trap scene Louise Matthews and Michael Condron sizzle with chemistry but I just didn’t see the point of using sexuality as a tool. I also didn’t see the point of so many characters great actors like Michael Johnston are lost in the background ( was his character just meant to be a hit at the modern day hippy? Or was it a jab at the educated?). 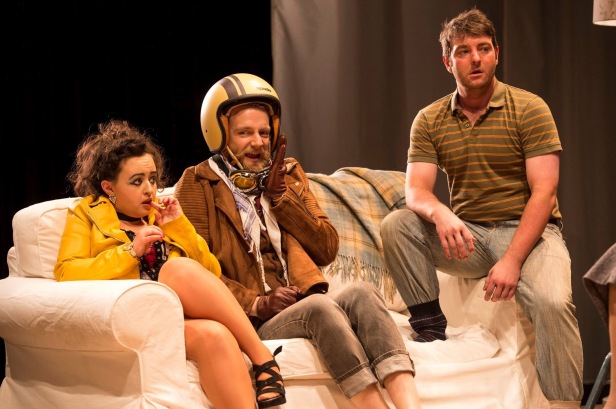 In conclusion this production was a miss for me it didn’t entertain or inform. It wasn’t an example of good Northern Irish theatre that I expected but as I always say this is just my view go out and check it out for yourself and let me know what you think.

Sinners runs until 3rd June. Check out details at http://www.lurictheatre.co.uk.

One thought on “Theatre Review: Sinners at The Lyric Theatre Belfast”