Jason Donovan is back in town and this time he’s brought some friends namely Elvis Presley,Johnny Cash, Jerry Lee Lewis and Carl Perkins. Donovan is back playing the part of Sam Phillips the man who created RockNRoll (and from my perspective it looks like Donovan is enjoying playing the part).In this remarkable true story the cast of The Million Dollar Quartet celebrates and honours that famous night back in December 1956.

Being an eighties child it is remarkable that the music of the fifties still permeates my playlists but it does and I’m sure it is the same for a lot of my peers. Not only that but that rockabilly style has also had a revival.This production had me singing,dancing and whooping along I wish I had pinned my hair and put on a big 50s style skirt! 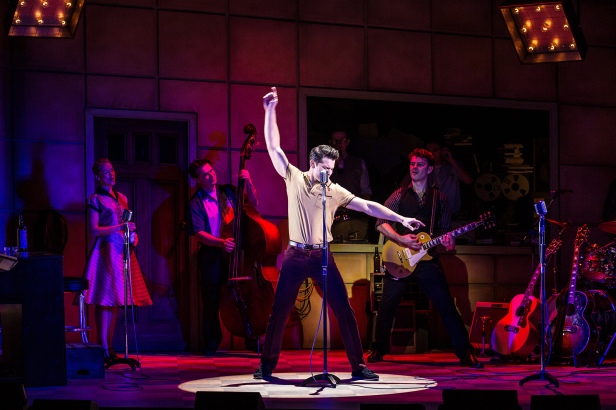 The cast of this production are truly what is known as a triple threat. Performers sing,dance,act and most play an assortment of instruments live on stage. Ross William Wild is an impeccable Elvis. He struts,sways and thrusts his way across the stage playing a young naive Elvis just at that start of his career. He is accompanied by Katie Ray who plays Dyanne a holywood songstress working the circuit and madly in love with Presely. She is the only female in the cast and I look on envious of her powerful voice as she belts out hits including Fever.

Matthew Wycliffe plays the boastful but frustrated Carl Perkins. Wycliffe embodies Carl’s frustration of being (at this time) a one hit wonder living in the shadow of Elvis but he also conveys the friendship and respect these men had for each other. 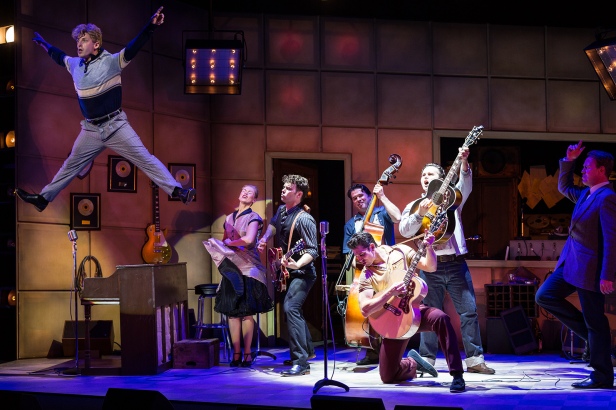 Robbie Durham is a fantastic Johnny Cash his rendition of Walk the Line and Folsom Prison Blues are note perfect provoking a singalong in the audience. His deep toned dialogues also start to show somewhat of the crisis of conscience Cash was feeling at this point.

But I have to say the run away star from this show has to be Ashley Carruthers as Jerry Lee Lewis. He brings life to the show   with comedy, floppy hair and the most amazing key skills. He brought the “Devils music” to the Grand Opera House and we waited on tender hooks for him to finally be able to play hit Great Balls of Fire.

Overall I felt like I had been transported back to the fifties straight into the Sun Studio, I felt like a groupie and I loved every moment. Go see this production you won’t regret it.