It’s finally February the month of love so if you are looking for something that will get you hot under the collar then check out The Full Monty (currently playing in the Grand Opera House.) With a line up of familiar cheeky faces you are sure to have a good night. 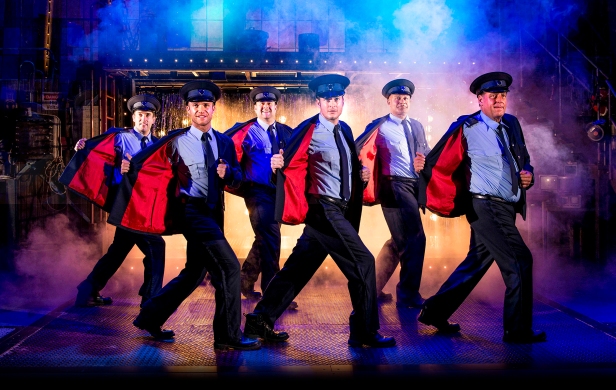 The Full Monty tour hit Belfast this week with all the comedy showmanship and male bonding of the familiar 1997 film.Although slow to start it was obvious to see this is a very tight ensemble. In fact I did spot a little bit of horseplay in the wings. So I think the actors have been enjoying themselves on and off stage.However the audience can’t help but fall in love with this bunch of likely lads.

Gary Lucy plays the lead Gaz, the ring leader  who has a mischievous smile but a heart of gold. Kai Owen plays Dave Gaz’s best friend he has some of the most comedic moments in the play but also some of the most poignant. Struggling with coming to terms with his unemployment,depression and his marriage troubles. Both actors shine in these roles and despite jeers and whoops from the audience they are able to stay in character throughout.

I must also mention the touching scenes between Chris Fountain  who plays Guy and Anthony Lewis who plays Lomper.(Chris doesn’t make an appearance until the end of the first act but when he does he certainly makes a memorable impression with a certain appendage.).But his very touching scene with Anthony Lewis, allows these two actors to really show their talent.

Add to this the tales of  Andrew Dunne as Gerald with a few gnomes, Louis Emerick with one amazing dance routine ( watch out for the mash potato) and one of the cutest child actors I’ve seen and this is a quite a show.

Go get your tickets now and find out for yourself whether they keep their hats on, believe me you will be in for a surprise.

The Full Monty is at the Grand Opera House until 4th Feb grab your last minute tickets at http://www.goh.co.uk