Alexandra Burke is back and rocking the Grand Opera House in Belfast. Last I had seen Alexandra she was the reincarnation of Whitney Houston in the Bodyguard (and she was amazing) but this time she’s back with slick dance moves,big hair,platforms and  with a sassy attitude to match.Not only that but she has brought her sisters along for the ride! 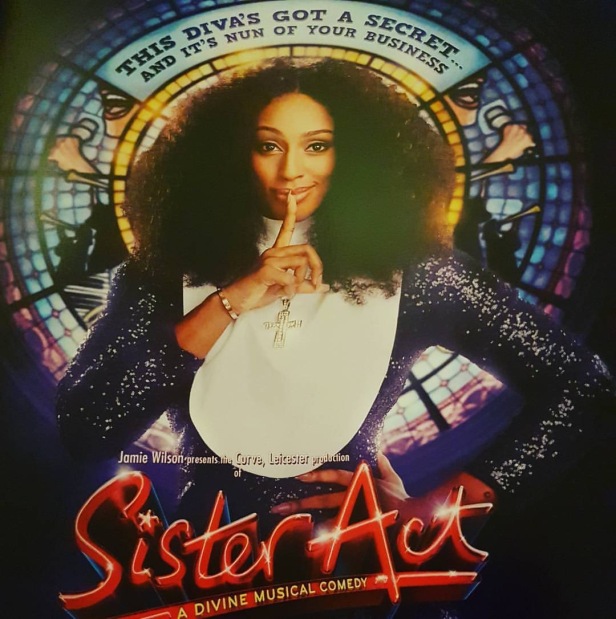 Directed by Craig Revel Horwood (best known for his role as a judge on Strictly Come Dancing) and based on the 1992 film starring Whoopi Goldberg this production has first class entertainment stamped all over it.I was rejoicing and shouting Hallelujah in the aisles whilst singing along to one of my favourite stage tunes “Fabulous Baby ” (which is still stuck in my head).

Sister Act is an amazing stage show. It is the only show were we as patrons actually pay money to hear talented singers sing badly. In fact the lovely sisters of  St.Katherines convent sing so badly, at one point I needed to cover my ears. But thankfully under the guidance of their wayward ward the sisters let loose and the songs become heavenly.Special mentions go to Sarah Goggin, Susannah Van Den Burg, Allison Harding and Rosemary Ashe I wanted to join you ladies on stage in your bonded sisterhood.

This is a strong company who not only act and sing but who also boast instrumental talents with live musicians on stage throughout.As well as a fantastic band who pop up in the cloisters in costume.

Alexandra excels in this role very different from her previous performances but she looks like she is enjoying her disco diva moment and she is perfectly balanced with the lead male Jon Robyns who plays Sweaty Eddie. Jon’s performance is commendable, he grows the character from the nervous policeman to the Saturday night fever go-getter.

Sister Act is a pleasure to watch and does exactly what it says on the tin for a West End Show; it entertains and leaves you with a smile on your face. Unfortunately the show closes in Belfast tonight after a sold out run in the Grand Opera House but never fear as it’s coming back in the summer (August 17) so snap up tickets now at http://www.goh.co.uk.

After all you are fabulous baby….