On Saturday night I was invited along to check out a new band in the Empire Belfast. To be honest I was wrecked after a long, crazy Halloween themed day in work, it was the last thing I wanted to do. However my mind was about to be changed and my energy levels shot through the roof.

The Logues are a folk rockband from Tyrone in fact they are from a town right next to my hometown of Strabane.I’m a bit gutted I’ve only just discovered them now as they are the craziest most energetic bunch of party animals I have seen in years.

They are currently promoting their new album Coming of Age which was released in April.The band consists of five very talented musicians who play bass,tin whistle,drums, banjo and have some of the most amazing rock and folk vocals. The boys are all about cheeky banter and crazy dance moves but this does not effect the music. 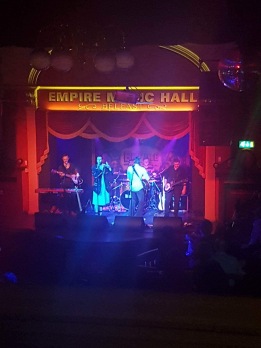 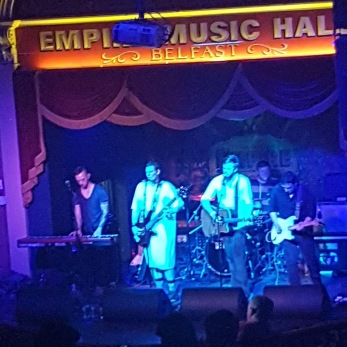 Covering a selection of their own tunes and a mixture of covers the audience in the Empire couldn’t help but dance along in fact I ended up in my sock soles in the front row. The boys covered some of my favourite songs including Tenacious D’s Tribute and Divine Comedy’s (Fr.Ted) My lovely Horse. Although I adored every minute of the upbeat fun tunes and I giggled the night away with my blogging partner in crime. The boys endeared themselves to me with a cover of one of my favourite Passenger songs Holes and their own new song YvonneJohn.

These guys are sure to rocket to dizzy heights soon as they are a very talented bunch of charming Northern Irish guys so my suggestion is to get out and see them very soon. You won’t regret it!!